JIMMY: On Friday, President Joe Biden and Afghan President Ashraf Ghani will meet face-to-face at the White House. And the meeting comes as the United States continues to withdraw its 8,600 troops from Afghanistan following the decades-long conflict.

President Biden announced in April that all U.S. forces would leave Afghanistan by Sept. 11th.

And the military has made substantial progress toward this goal, announcing earlier this month that the drawdown was already more than 50 percent complete.

Analysts, however, have raised concerns that the Afghan military doesn’t have sufficient firepower to retain control of the country — not with the Taliban claiming to have taken control of more than 50 districts since Biden’s announcement.

As for what to expect from Friday’s meeting, the chairman of Afghanistan’s High Council for National Reconciliation Dr. Abdullah Abdullah will be accompanying President Ghani during the visit.

He’s expected to seek assurances from Biden over continued U.S. support of Afghan government forces after the drawdown is complete.

Biden is likely to call for renewed commitment to the Qatar-led peace talks, which have stalled in recent months.

JIMMY: Also on Friday, white former Minneapolis police officer Derek Chauvin is set to be sentenced for the murder of George Floyd.

It was just two months ago that a jury found Chauvin guilty of murder and manslaughter for his role in killing Floyd, a 46-year-old Black man, during an arrest outside of a Minneapolis convenience store.

Chauvin is the officer seen in video of the incident kneeling on Floyd’s neck for more than nine minutes.

Three other former officers involved in Floyd’s death are set to go on trial next March.

Now, it was Floyd’s death that sparked worldwide protests and the largest civil rights movement in the United States in decades. Unsurprisingly, many people will be watching when Judge Peter Cahill delivers Chauvin’s sentence.

And while prosecutors have requested a sentence of more than 30 years in prison, Chauvin’s attorney has requested probation for his client

Depending on the sentencing, fresh protests could spark in the aftermath.

JIMMY: On Saturday, former President Donald Trump will speak to supporters at a rally in the small town of Wellington, Ohio.

That appearance comes as the former president struggles to reach supporters due to being banned on several social media platforms. It also comes on the same day Arizona is expected to finish its Republican-led election audit.

Trump’s rally is the first of several upcoming events aimed at boosting Republican allies running for Congress against ones who stood against Trump’s claims of election fraud.

Gonzalez was one of 10 Republicans who voted to impeach Trump following the January 6th attack on the U.S. Capitol.

Now, even though it’s diminished, Trump’s ability to spread misinformation about the 2020 election continues to attract significant numbers of Republican voters and minimize opposition within the party.

And while Arizona’s partisan election review won’t change the state’s certified results, it could potentially inspire similar efforts in swing states such as Pennsylvania and Georgia. That raises prospects of unrest and possibly violence by far-right groups who want Trump back in office.

JIMMY: On Monday, transportation organizations in India plan to stage nationwide protests. They’re calling for the regulation of diesel prices which spiked during the coronavirus pandemic

They intend to submit a memorandum and list of demands to Prime Minister Narendra Modi ahead of the protests.

In addition to demanding lower fuel prices and a decrease in taxes — which vary across the county, they’ll also be calling for a six-month moratorium on monthly loan installments and more government aid to relieve economic pressure on workers of the sector.

Now, the strike plans do include road blockades. And while they are currently limited to Monday, it is expected that the protests could extend beyond June 28 if the demands of the collective are not met before the end of the month.

What’s more, according to All India Motor Transport Congress’ President Kultaran Singh Atwal, the organization has outlined a plan to call for an indefinite national strike in the first week of August if the situation persists.

JIMMY: Our last item for this forecast is on the possible environmental disaster in Sri Lanka stemming from the sinking of a cargo ship. For more on that I spoke with Factal editor Imana Gunawan.

JIMMY: Hey, before we get into the whole environmental angle to the story, can you just remind us on what exactly happened with the cargo ship in Sri Lanka?

IMANA: Yeah, so a Singapore-flagged container ship actually burned for a month. It started burning on May 20th and then it sank on June 17th off of Sri Lanka’s capital Colombo.

JIMMY: It burned for a whole month?

IMANA: Yeah, so, Sri Lanka’s naval forces said, as I mentioned, that the blaze broke out on May 20th while X-Press Pearl, which is the name of the cargo [ship], was anchored northwest of Colombo. And they also said that the fire was caused by the vessel’s chemical cargo, which includes 25 tons of nitric acid as well as other chemicals. 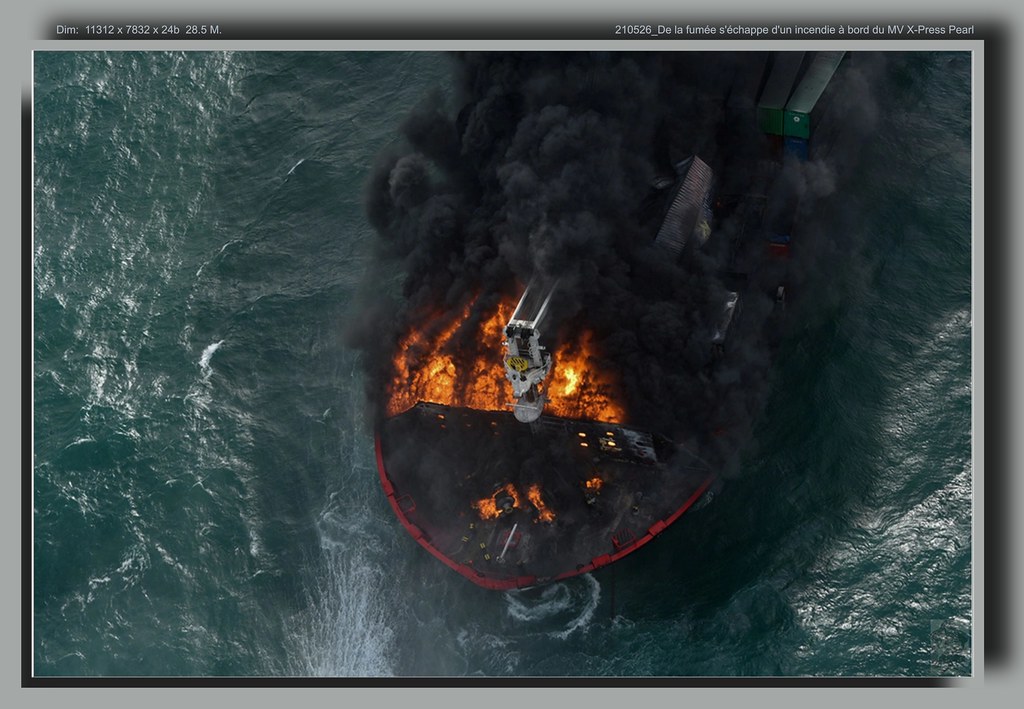 JIMMY: I suppose that explains the environmental problem then?

IMANA: Not exactly. Most of the chemicals were actually burned in the fire. Experts feared there would be an oil spill earlier, but so far there hasn’t been any sign of that. But the environmental problem kind of stems from the fact that debris like fiberglass and billions of plastic pellets have, you know, polluted nearby beaches and nearby coastal waters, basically threatening the lives and livelihoods of the coastal population. And the country’s UN representative also said that the vessel caused, you know, quote, “significant damage to the planet.”

JIMMY: So what’s the cleanup plan then?

IMANA: So far Sri Lanka’s marine environment protection authority said it has already collected more than 1,000 tons of debris stretching across 200 kilometers of coastline. And now a team of the United Nations oil spill and chemical experts will actually head to Sri Lanka to clean up the hazardous substances in the waters.

JIMMY: Well, besides fiberglass and plastic pellets washing up on beaches, have you seen any other impacts?

IMANA: I think one of the most concerning ones is that we’ve seen hundreds of marine carcasses — including turtles, dolphins and even a blue whale — they’ve also washed ashore since the vessel fire started. So it might just be the start of an ongoing disaster here.

JIMMY: Well, let’s hope that the UN experts can help Sri Lanka deal with this situation before it gets any worse, I guess.

IMANA: Yeah, definitely. As I mentioned, it’s threatening lives and livelihoods of the coastal population and Sri Lanka is an island nation. So let’s hope that they can definitely help with the cleanup and fallout from this.

JIMMY: Well, thank you for the update, Imana. I appreciate it.

Also, I should mention that a lot of work goes into researching these stories — research that we like to share with the listeners. That’s why each of our show’s transcripts include links to many of the articles and sources editors used in compiling these stories. Be sure to check those out.